I often make light of how lazy I am. I think it’s part of the reason I got into computers in the first place. I wanted computers to do the boring, monotonous stuff so I didn’t have to. Today, I’ve taken it a step farther.

Ubuntu Updater popped up today with a list of updates that I’d forgotten to run over the last however long. I usually manually run updates because I like to do it with apt and not use the Ubuntu Updater.

I guess I’ve been slacking, because today there was quite a list. After running the requisite updates to get myself up to current, it asked me why I don’t use LivePatch.

I’ve been a little shy about doing it in the past for a variety of reasons, but mostly because I like to have control over my own system, and if you turn this feature on, Canonical does it for you. If there’s a bad patch, you’re not going to be able to catch it before you install it because Canonical will have already done that for you.

Add to that my inherent and spreading laziness, and Shazaam! 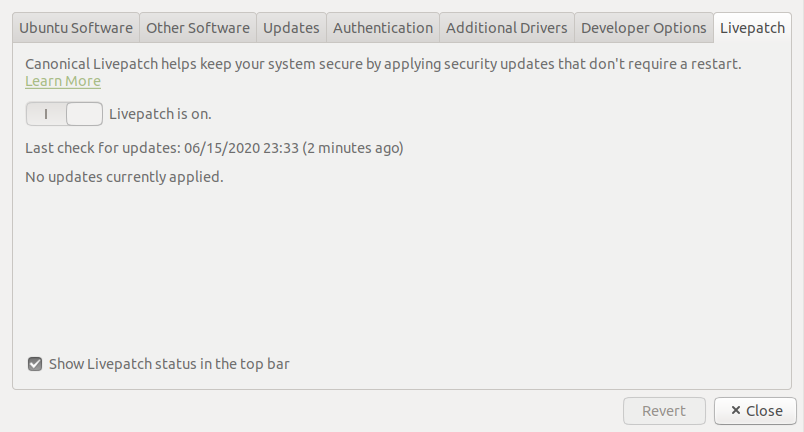 Enabling the feature is pretty easy. Flip the switch on the tab. The one gotcha that I wasn’t expecting is that you’re required to have an account in Canonical’s portal. I actually already had one from back in the Ubuntu One days that was surprisingly still active.

Even more surprising was that I remembered the password.

I’m assuming that this feature is because they’re offering the service free for personal use, but Enterprises have to fork over cash. There’s no way for Canonical (other than the honor system) to know who’s personal and who’s enterprise without this authentication.

Still, felt a little icky to have to create an account to update my system.