I’m sure most people that have found their way here know about the turmoil that’s been effecting Twitter lately. I know there are a lot of people that have strong feelings about it one way or another, but it’s never really been an issue for me since I stopped using Twitter in any real way years ago. Today I thought I might retire my Twitter accounts, but not really.

So, I’ve had multiple Twitter accounts for years and years. I did this because I had one where I talked to friends and family, and one that I went all in on the tech. I’ve always been kind of the black sheep in my family and no one else really has any interest in technology, so it seemed like a better idea to keep them separate than to torment my family and friends with things they had no interest in.

I used Twitter for years and years, and then came Google+. And then went Google+. I really enjoyed my time there, but I enjoyed the people I met there better than the service itself. After it’s untimely demise, I moved over to Mastodon and almost immediately Fosstodon. After Fosstodon came around, the amount of time I spent on Twitter dropped like a stone. I just didn’t enjoy it. I setup a mirror of my Fosstodon account to Twitter at one point, but stopped pretty quickly because I didn’t see a point. I was posting on Fosstodon but never checking to see if there was any interaction with those posts on Twitter (spoiler: there wasn’t).

Fast forward to today, I look at the Twitter accounts I’ve got open and I’ve posted somewhere in the neighborhood of 3 or 4 times to all of them since 2020, usually unanswered queries. Why do I have these things again?

Well, I’m not going to delete them. Part of that is nostalgia, and part of it is I feel like I could put them to a potentially good use. So, logging into my Twitter account for the first time in I don’t know how long, I set my header information to this: 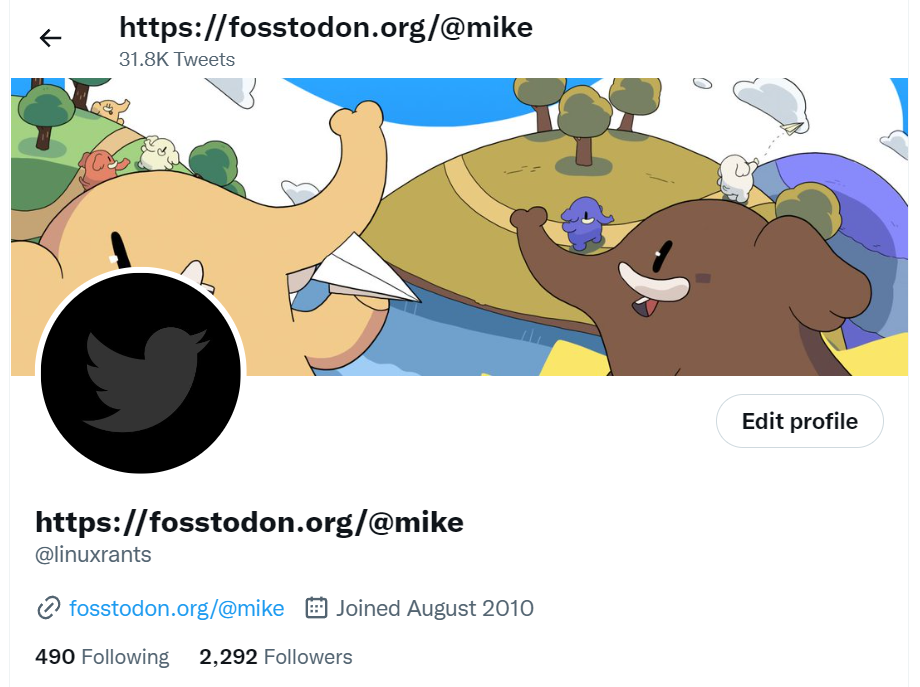 I figure this way I keep the account, no one else uses it for any reason, and I redirect anybody who may be interested to my actual social media presence. I also thought that today would be a good day to create a backup of anything I’ve posted over the years, but unfortunately Twitter doesn’t seem to be working super well these days.

So, I’m going to have to try to get my archive at a later date, but at least I’ve got my Twitter profile setup in a way that I like. It’s now officially retired, but not really.