In the September 11th newsletter from Mycroft AI, the company was pleased to announce the availability of the new Mycroft GUI. Being a huge fan of Mycroft, I couldn't wait to give it a spin.

This is an alpha release of the Mycroft GUI. It is not production ready, and no one is claiming that it is.

This GUI is not intended to be used on a computer. It's an alpha release of the GUI that will eventually be used on the Mycroft Mark II device.

Installing the GUI is pretty painless. If you've alread got Mycroft running on your Linux computer it's quick and easy. The newsletter contained these simple steps, and it's really all you need to get you up and running.

Once you've got the software installed, just run “mycroft-gui-app” at your favorite launcher, and away you go. 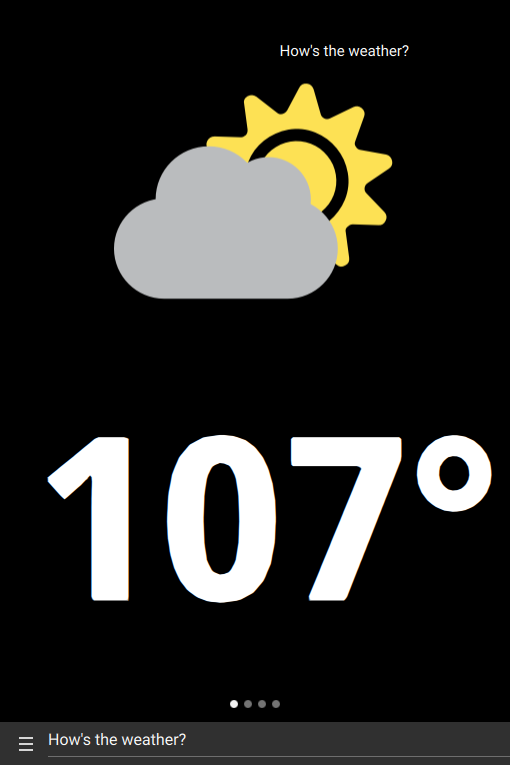 There's a quick and easy text entry box down at the bottom where you can directly input your queries, or you can speak them as you usually do. This is a nice feature for me because I often like to have the Mycroft CLI open to enter my questions directly rather than speaking to the assistant. I usually have both my microphone and speakers muted, and this lets me communicate directly with Mycroft without using either.

There are four dots down at the bottom of the “screen” which indicates pages. You can “swipe” to the right and left to show additional pages. It works pretty well considering this was not intended to be running on a computer, but an appliance. In fairness though, the difference between a Mycroft Mark I or Mark II and a “computer” is pretty much semantics. They're both based on the Raspberry Pi, and are perfectly capable of operating as a low end computer.

I did see some glitches in how the display worked, but that is to be expected in alpha software. I am somewhat annoyed we're still at the alpha stage when the Kickstarter for the Mark II originally expected the devices to ship in December of 2018.

Still, if you're running Mycroft on your Linux machine, I highly recommend giving the GUI a test drive.