My wife was trolling the Internet a few nights ago, and she ran across a list of possible blogging topics. One of the topics on the list was something about your favorite retro device. I don’t remember the exact wording, and I kind of wrote it off at the time. I think I was already writing something about #Mycroft, but it reminded me of a device I had a long time ago that I felt (at least then) was way ahead of it’s time. 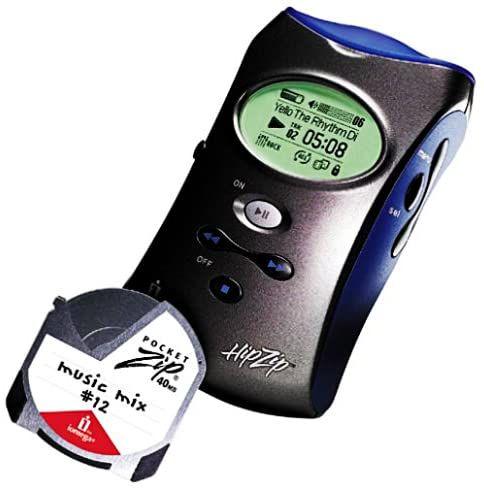 I don’t remember the precise dates involved here, but it was sometime in the very late 90s. I picked up an MP3 player called a HipZip. It was a Walkman type device that used Iomega’s PocketZip (Clik!) disks to store MP3 files and worked as a standard music player.

The HipZip predated the iPod by at least two years. It used an external storage medium, which you could look at as a positive or a negative. The disks themselves were only about 40MBs each, which would give you ten to twelve songs if you were conservative about your encoding. Of course, since it was removable, you could swap them out as often as you want for as many songs as you could afford to buy disks for.

The device was easy to use, and since you could only get ten to twelve songs on a disk at a time, playlists and other more complex music management weren’t considerations.

Unfortunately, the HipZip never did take off. The iPod came out and solved many of the limitations of the device using solutions that weren’t practical at the time it was initially released. The PocketZip drive (Clik!) was discontinued after a single generation. Still, it was a cool device at the time, and I really liked it.

At least it wasn’t a Zune.