I get the logic behind Tony Sacconaghi's idea. Google is currently paying Apple billions of dollars a year to feature their search engine as the primary for iOS. It's worth it to Google, and Apple is getting paid a lot of money.

The theory is that Google might be willing to save themselves a couple billion by stopping that check to Apple, but probably won't because it doesn't want to let Bing pick back up again.

I don't think that's the case.

Disclaimer: Tony Sacconaghi has a lot more letters after his name than I do.

Right now, Google has soundly whipped Apple in the global mobile market. Three out of four phones in people's hands are Android phones. Only one in four is Apple's.

If my maths are correct, that means that around 875 million of those 3.5 billion have Apple devices in their hand. Google forking over a couple billion gives them access to 875 million users. I'm guessing that's worth it to Google.

Google is not worried about Bing. Google knows it's getting its money's worth. 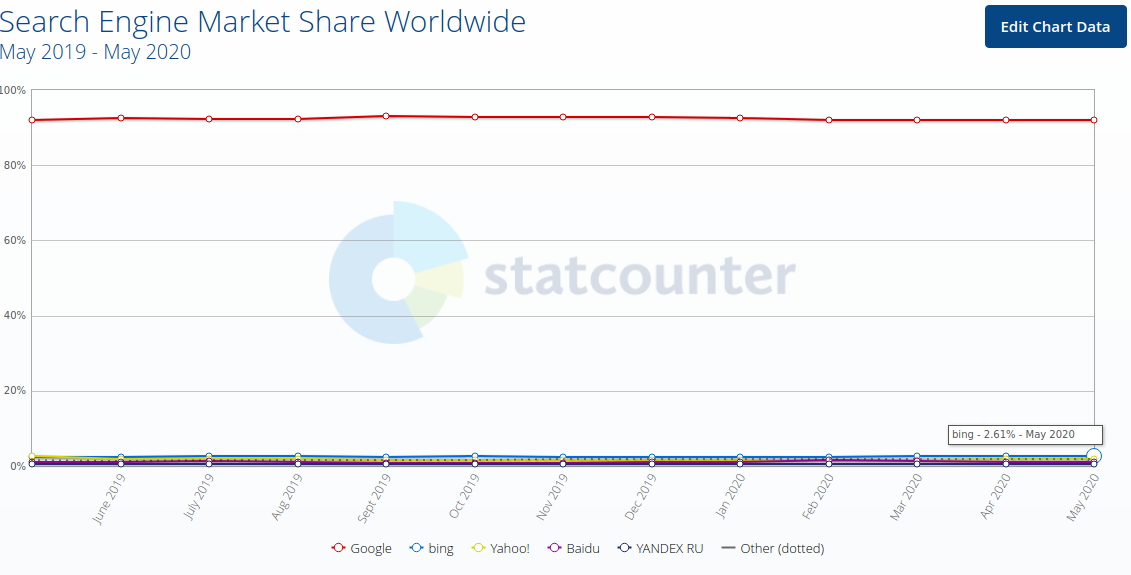 Bing market share is currently just above 2.5%. Google is not worried about Bing in this market. At this point there is virtually no reason for Google to stop paying Apple.

But let's just say they did. Apple buys DuckDuckGo. How would that work?

The above graphic shows that Bing is currently sitting at 2.61% market share. I don't know where DuckDuckGo falls in the current market, but the lowest on that chart is .52% (Yandex RU), which I've never heard of. I have to assume (though I could be wrong) that DuckDuckGo is below that.

Apple purchasing them would dramatically increase their market share just by the virtue of existing iOS users using the search engine by default. Still, it wouldn't matter.

Apple has tried and failed to compete with Google before.

iOS is one of those failures. Google started late, and still ran past Apple like they were standing still.

iAd is one of those failures. Apple created their own ad network which almost no one knows about because of how badly it failed.

Ping is one of those failures. Google came out with a social network to compete with Facebook (Google+). Even Google failed here, but compared to Ping, Google+ was a resounding success.

An Apple owned DuckDuckGo would fail faster than that.

Here's another thing, and I have to stress that this is just my personal opinion.

I don't think Apple really cares about your privacy.

Sure, they say they do. They talk about it often.

I think Apple would sell you out to the highest bidder in a heartbeat if they could make money at it.

If they bought DuckDuckGo and were failing, I fully expect they'd integrate with other services that would sacrifice your privacy on the alter of profit. If they continued failing, they'd let DuckDuckGo die just like they did Ping.

All that would come of Apple buying DuckDuckGo would be killing DuckDuckGo for those of us that use the search engine. They'd fail to compete with Google and end up shutting the whole thing down.

I sincerely hope that no one at Apple read this idea or is seriously considering it.